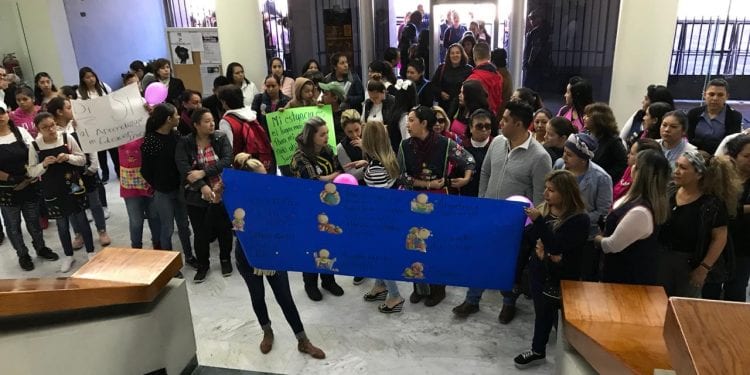 “I have no one to leave my child with, I had to go out to work”, lamented a mother affected by the budget cut to the children’s rooms.

During the ordinary session of the Congress of the State of San Luis Potosí, more than 200 mothers and teachers protested against the budget cut at the request of children, a policy determined by the federal government, led by Andrés Manuel López Obrador, who has justified his decision because of the need to attend priority sectors of the population, to undue charges and various acts of corruption in the operation of these establishments.

In an interview, a mother of the children’s organization “Pingolandia”, acknowledged that this was closed for having “ghost children”: “many mothers were left without daycare, most of them relocated in others but there were many like me, which we did not reach , they sent me to one in Carranza and it is super far from my home and my work”, she explained.

In that sense, she commented that she had to give up her job, since she had no one to leave her baby with: “I do not have anyone to leave my child with, I had to leave work, I went to the nurseries in Sedesol, they tell me that There is scholarship support, but what is the surprise that the scholarships are withdrawn. With a salary I can not pay 1650 pesos per month”.

The mother acknowledged that it is necessary to put an end to the corruption that exists in children’s instances: “I understand that you want to cleanse all those frauds that occur, but there are ways, why we pay just for sinners. I do not leave my son to go loose as many people say, we really need to work and we need support”.

Finally, she declared: “I do not want the thousand 600 pesos bimonthly, I do not want that money, I want my son to grow up with qualified people in what they do, that they have that preparation, I do not have it”.

1600 pesos every two months for children stays is not enough: deputy